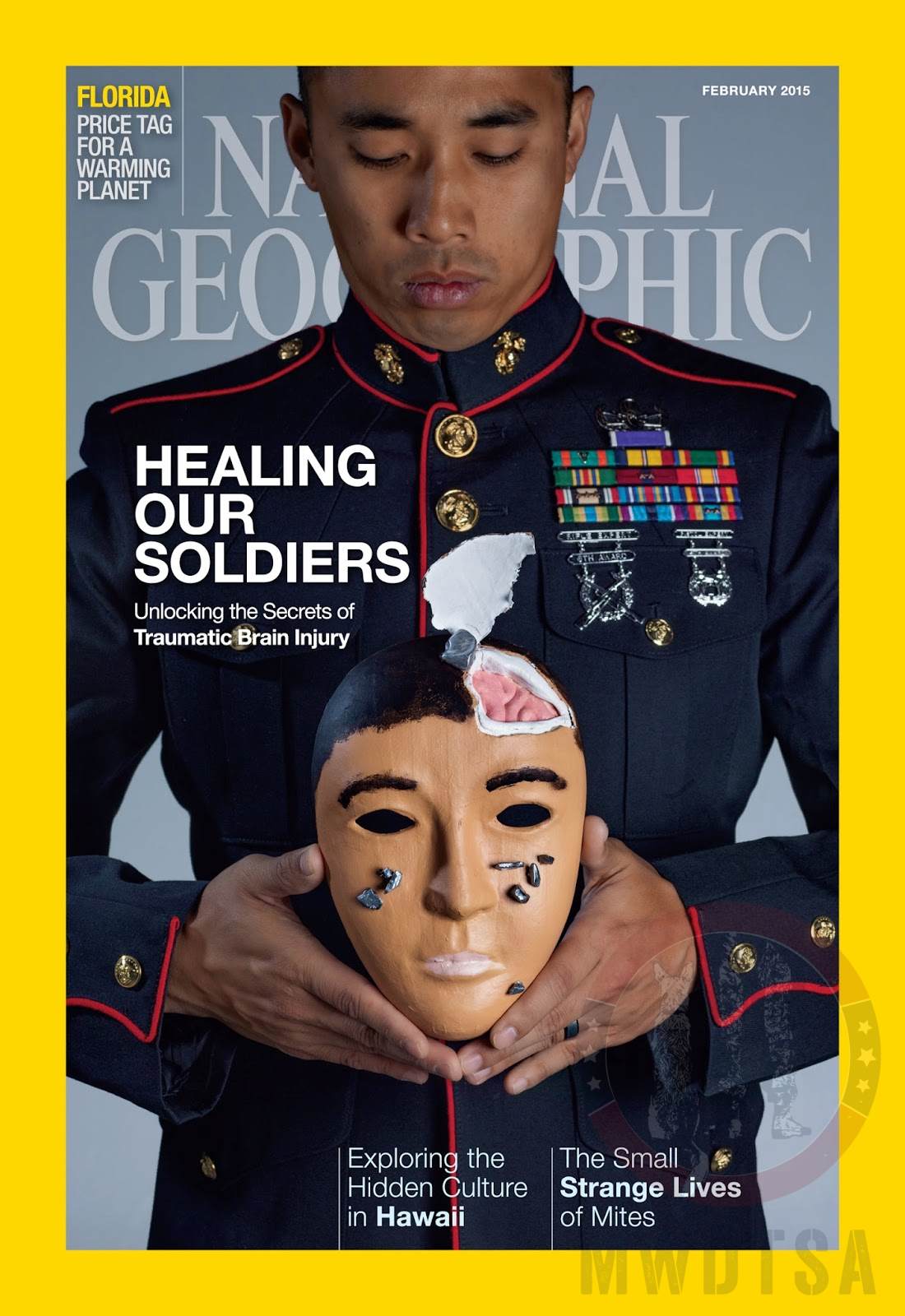 For more information on this exceptional piece, please follow this link:
http://www.nationalgeographic.com/healing-soldiers

The following is an excerpt from the February issue of National Geographic.  The full feature is available at nationalgeographic.com.

“THE INVISIBLE WAR ON THE BRAIN by Caroline Alexander

Brain trauma from blast force is the signature injury of the Iraq and Afghanistan campaigns, afflicting hundreds of thousands of U.S. combat personnel. Although unseen, the damage strikes deeply into a soldier’s mind and psyche.

INSIDE THE PROTECTIVE BUNKER I waited with the explosives team, fingers wedged firmly in my ears. Outside, shot number 52, trailing a 20-foot length of yellow-and-green-striped detonating cord, was securely taped to the wall of a one-room plywood building with a steel fire door. There was a countdown from five, a low “pow,” and a dull thump in the center of my chest. The thump is the hallmark of blast. “You feel the thump,” one team member told me. “I’ve been in blast events where we’re actually hundreds or even thousands of feet away, and I still feel that thump.”

The mystery of what that thump does had brought me to a World War II bombing range some 40 miles southeast of Denver. Back then it was used to test half-ton ordnance; now it serves to study controlled explosives used by soldiers to blast holes through walls and doors in combat areas—standard practice in modern warfare. The eventual objective of these tests is to discover what that blast thump does to the human brain.”

All images are from the February issue of National Geographic magazine. MWDTSA watermark is applied to prevent unauthorized photo redistribution. 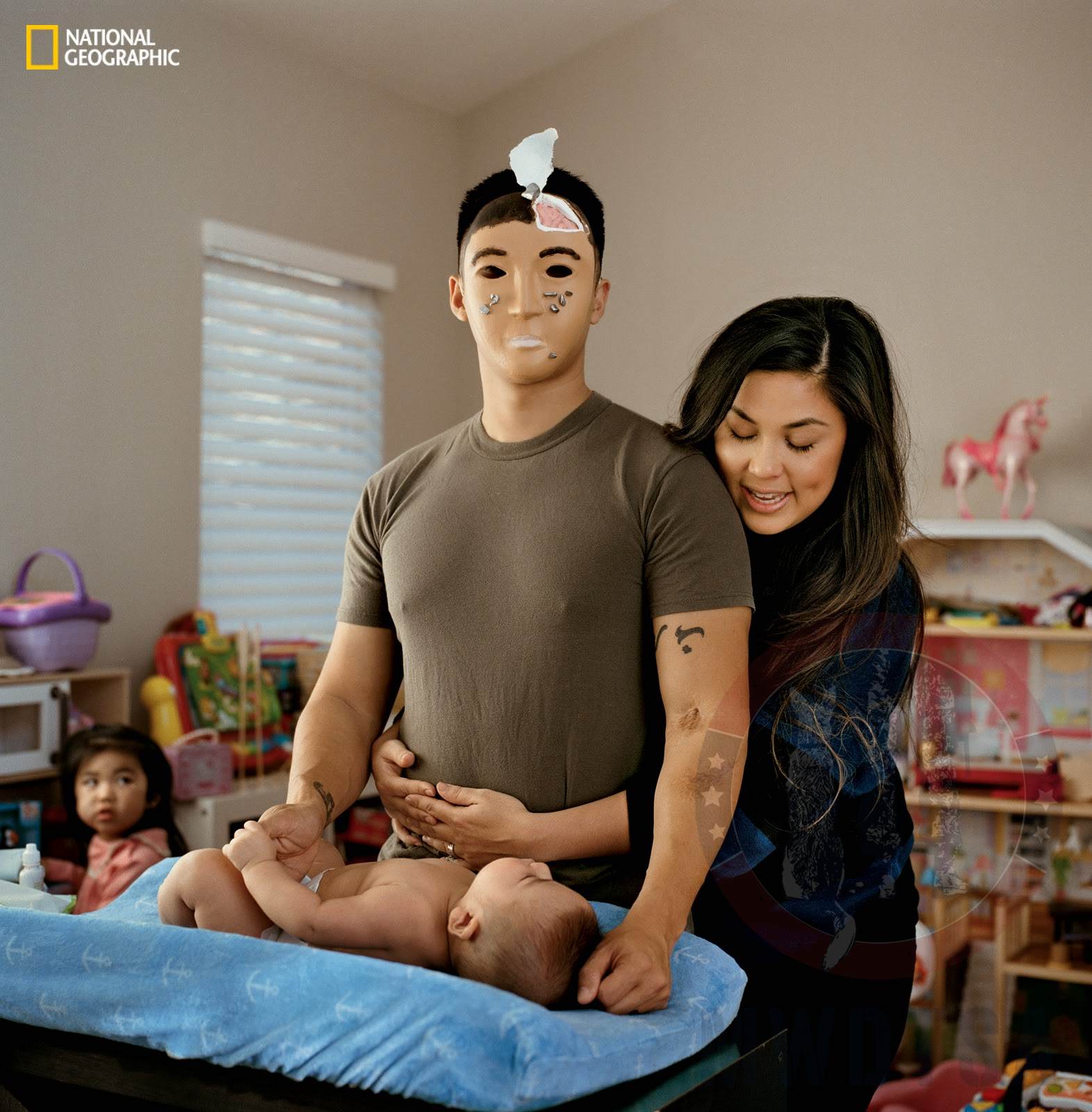 “Detonation happened, and I was right there in the blast seat. I got blown up. And all this medical study—nobody ever thought that they [blast events] were very harmful, and so we didn’t log them, which we should because all blast forces are cumulative to the body. On a grade number for me, it would probably be 300-plus explosions … I’m not going to not play with my children. I’m not going to let my injuries stop them from having a good life.”

Impeccable in his Marine uniform and outwardly composed, McNair sits on the porch of his parents’ home in Virginia, anonymous behind a mask he made in an art therapy session.

“I was just going through pictures, and I saw the mask of Hannibal Lecter, and I thought, ‘That’s who I am’ … He’s probably dangerous, and that’s who I felt I was. I had this muzzle on with all these wounds, and I couldn’t tell anyone about them. I couldn’t express my feelings.” 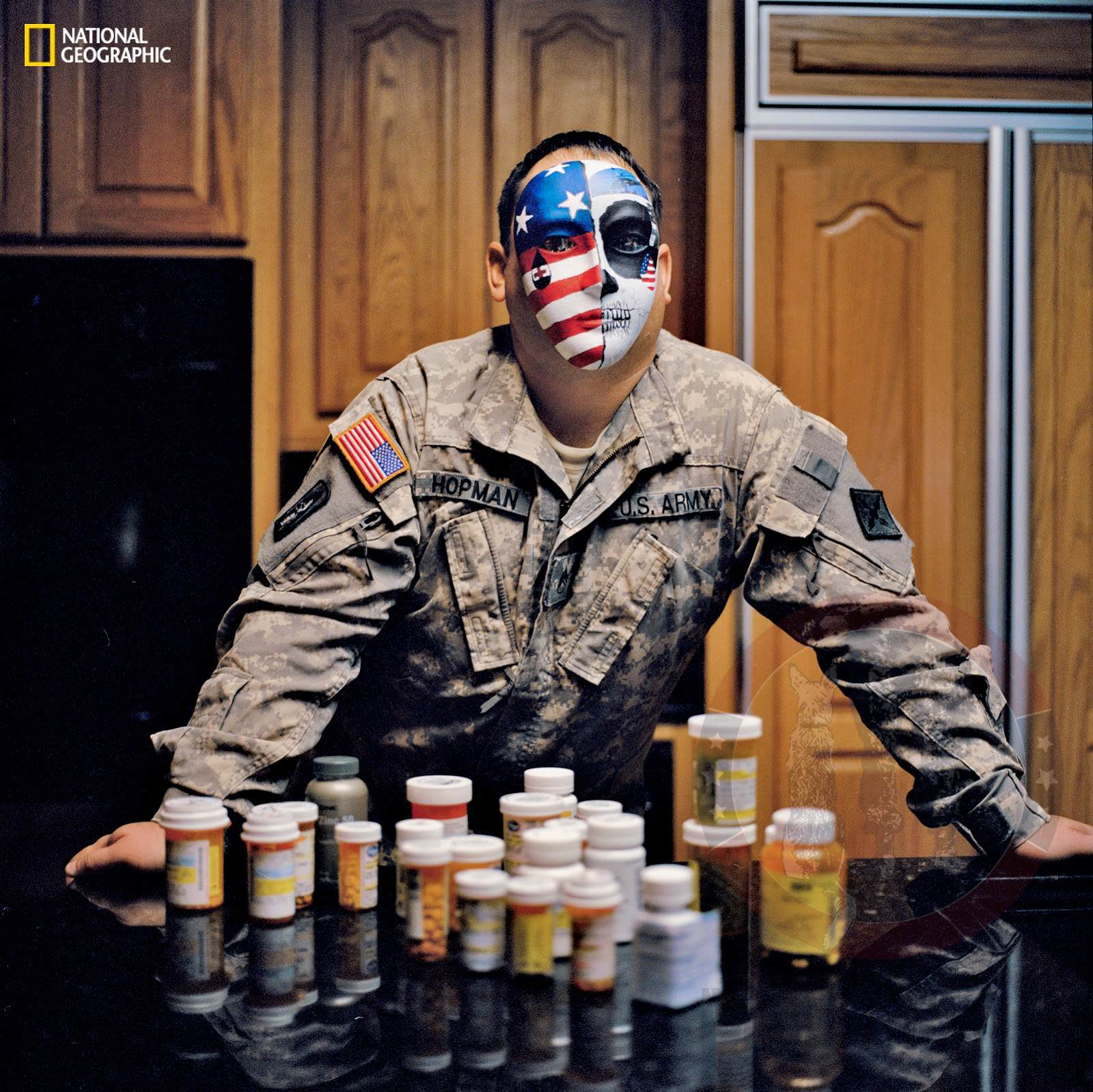 Wearing his mask—half patriotic, half death’s-head—Hopman confronts the battery of medications he takes daily for blast-force injuries he sustained while treating soldiers as a flight medic. 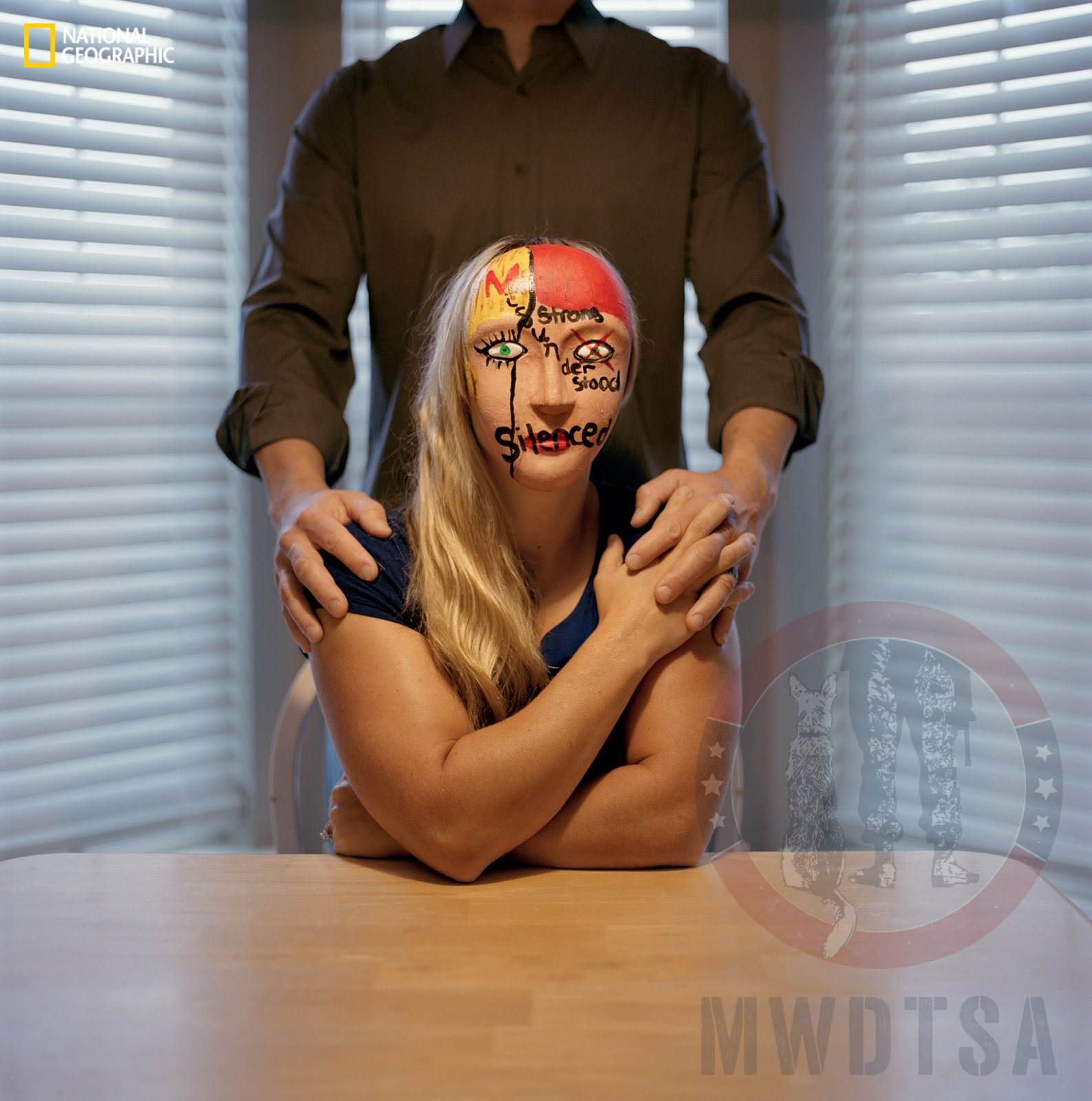 Tiffany H., as she prefers to be known, was “blown up” while helping women in a remote Afghan village earn additional income for their families. Memory loss, balance difficulties, and anxiety are among her many symptoms. The blinded eye and sealed lips on her mask. 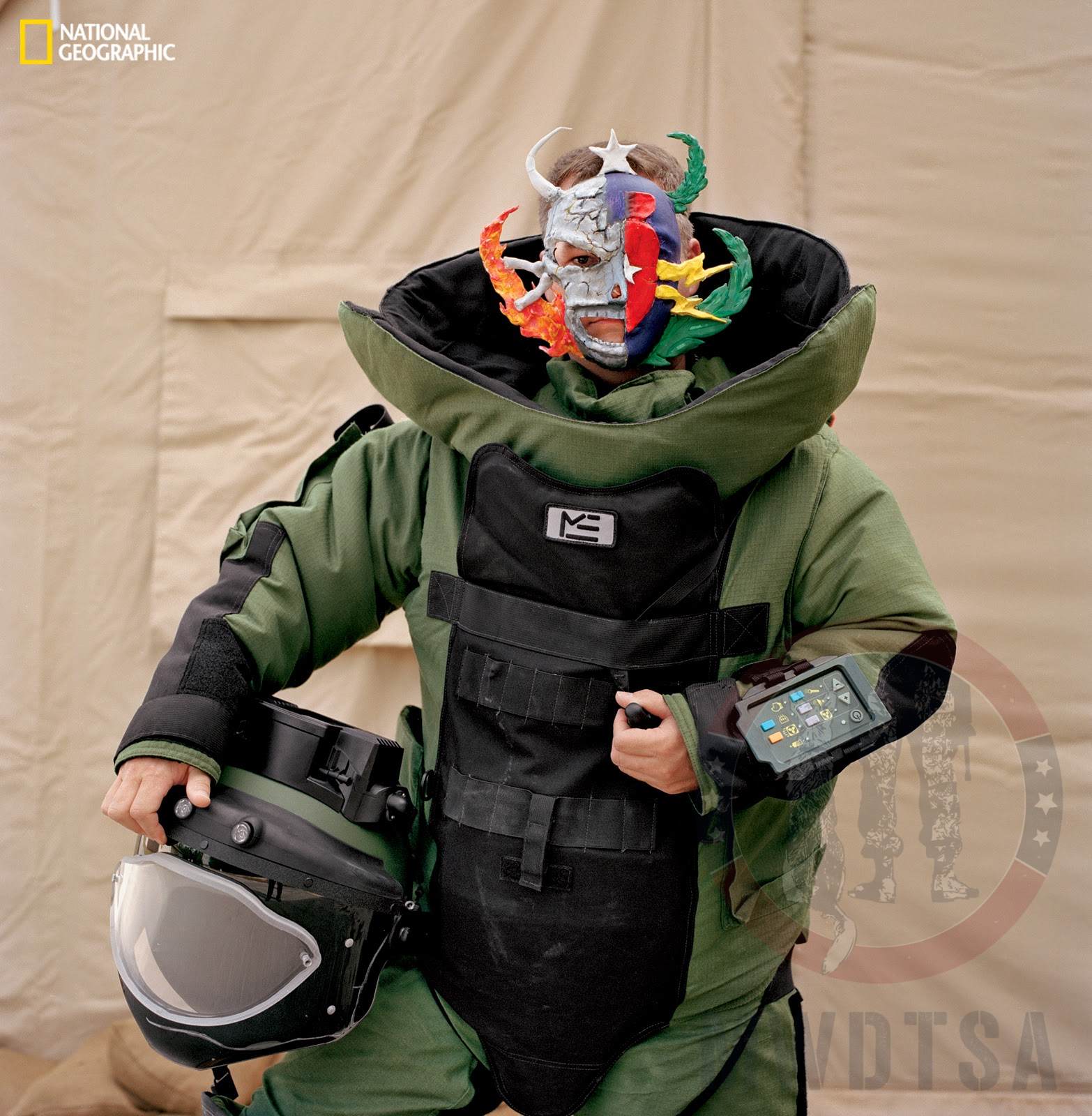 Suiting up before attempting ordnance disposal

“is the last line. There’s no one else to call … It’s the person and the IED … and if a mistake is made at that point, then death is almost certain. They call it the long walk because once you get that bomb suit on, number one, everything is harder when you’re wearing that 100 pounds … Two, the stress of knowing what you’re about to do. And three, it’s quiet, and it seems like it takes an hour to walk.”

Picture Yourself as a MWDTSA Volunteer