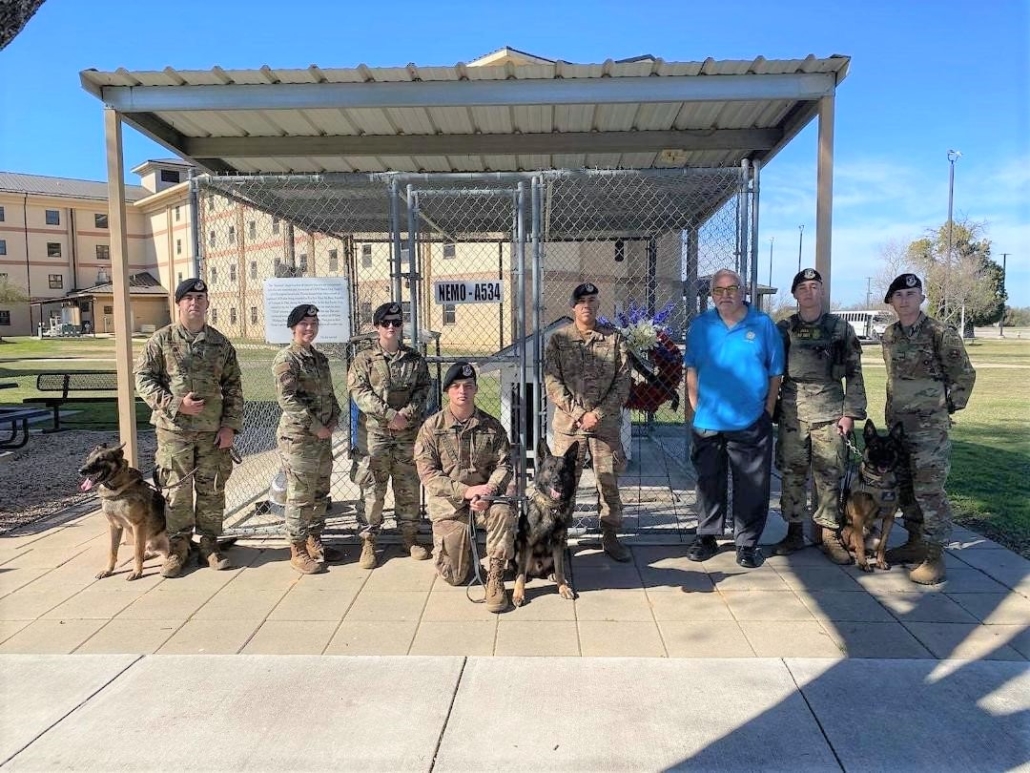 On February 5, 2020, Vietnam veteran dog handler Bob Throneburg passed away at his South Carolina home. His obituary contains details on the memorial service.

The news spread quickly through the military working dog community, along with a 2017 article from Duke Energy’s Illumination. Duke Energy has graciously granted us permission to reprint this piece below.

As you reflect on Bob Throneburg’s life and legacy, we invite you to share memories and thoughts in the Comment section below. Rest easy and thank you for inspiring our nation’s MWD program.

A soldier and the dog that saved his life

Waiting until the cover of darkness, in the suffocating heat of Vietnam, Air Force airman Bob Throneburg started out on patrol with his war dog, Nemo. It was December 4, 1966. Sixty Viet Cong had infiltrated Saigon’s Tan Son Nhut Air Base the night before with a brutal mortar attack, and enemy stragglers remained hidden.

Nemo’s charge was to find them. He was trained to be a killer.

On Veterans Day, November 11, he is celebrated as one of the most heroic of the U.S. K9 Corps, which formed in 1942 and deployed more than 4,000 dogs during the Vietnam War.

That night in Vietnam, the German shepherd’s ears shot up. His body stiffened, hackles raised, tail rigid. He sensed the intruder before Throneburg saw him. The guerrilla tried to flee, but Throneburg fired his M16.

It was the first time in combat for Throneburg, 22, from Albemarle, N.C., who had arrived in Vietnam five months earlier. He couldn’t stop to dwell on the deadly encounter. He and Nemo, alongside another soldier and his dog, continued on their mission.

“The last thing I remember, it was 3 a.m. and I was hiding behind a bulldozer,” Throneburg said.

For a second time, Nemo’s ears shot up, alerting Throneburg to an intruder.

The Viet Cong fired several shots from his AK-47. Throneburg took a hit in his left shoulder, knocking him to the ground. Nemo took one on his nose and lost his right eye. Nemo continued fighting, giving Throneburg time to call for backup.

The other U.S. soldier pulled Throneburg to safety.

“Then I started fading away,” Throneburg said. “Nemo came back and crawled on top of me.”

And there Nemo lay, guarding his handler the way he was taught, refusing to budge. “On a good day, he was just a normal laid-back sentry dog, easygoing,” Throneburg said. But when you got him mad, “he was about as mean as a brokeback snake.”

It took a former handler to finally pry Nemo off.

In a 1967 article in Air Force News, the base veterinarian was quoted as saying: “He was in pretty bad shape. I had to do skin grafts on his face and perform a tracheotomy to help him breathe. His right eye had to be removed, but even this didn’t lessen his ability. It only made his other senses – hearing and smell – more sensitive.”

Throneburg and Nemo were reunited one last time at the base hospital. In a photo taken that day, Nemo leans in toward a smiling Throneburg as the handler scratches his companion’s neck. They never saw each other again. 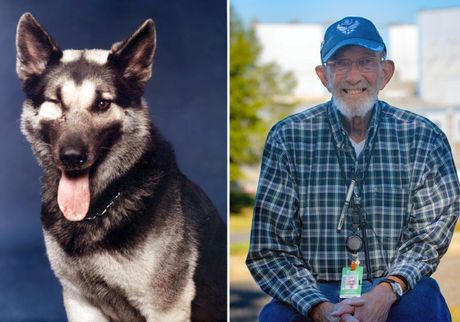 Throneburg was airlifted to a hospital in Japan and underwent five surgeries over seven months to repair his shoulder. “It hurts every day of my life,” he said. “Every day. It never goes away. It always hurts. I’m starting to lose quite a bit of mobility.”

Nemo recuperated at Tan Son Nhut before retiring from active duty. He became the face of the K9 Corps, used to help recruit thousands of dogs into the service. He died in 1972 at Lackland Air Force Base in San Antonio, where his kennel stands as a memorial.

He and his wife, Patricia, live in Gaffney, S.C., with their 4-year-old great-granddaughter, Elizabeth Jade – and two rescue Portuguese water dogs, Maggie and Bessie. Over the years, they’ve kept other dogs and they plan to have more. But for Throneburg, none can ever compare with Nemo, the dog who saved his life.

“Your sentry dogs become a part of you, a part of your being,” he said. “You work with them so closely and you depend on them and they depend on you. That’s why they call them dog teams.”

An inscription Throneburg wrote for a war dog memorial in Tampa, Fla., reflects the depth of his feelings:

Defender of the night.

He was a war dog.

Stay back, handler down!

Nemo, serial No. A534 of the 377th Security Police K-9, was returned to the United States and spent his retirement at the Department of Defense Dog Center at Lackland Air Force Base in San Antonio. He died there in December 1972.