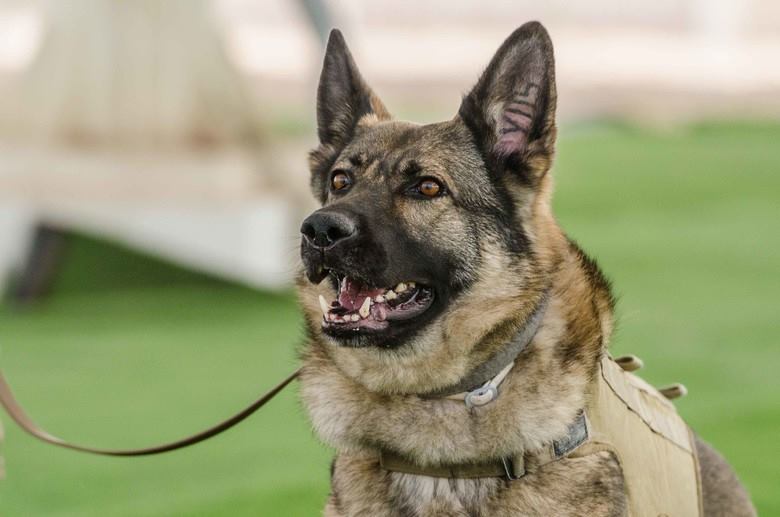 Development of German Shepherd Dogs as a Breed and Early Trials

Between 1899 and 1914, the German Shepherd Dog (GSD) was developed by Captain Max von Stephanitz of the German Army to be a working dog. Many years of selective breeding by Stephanitz honed the traits of intelligence, loyalty, dedication, and tenacity needed for military and police applications. Eager to show the prowess of the new breed, Stephanitz loaned these new dogs to German police departments–the first K9 Corps.

During this trial period with German police, these new dogs showed great promise in areas such as obedience, tracking, and protection. Stephanitz believed these dogs could also be useful to the German military. After these early trials with German Police units, Stephanitz sought to have GSDs added to German Military units. The timing could not have been better for Stephanitz and his new German Shepherd Dogs. 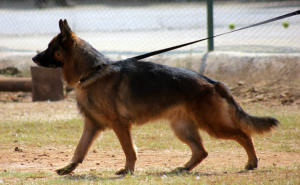 In 1914, at the beginning of World War I, German Shepherd Dogs began serving with the German Military. They performed a number of tasks on the battlefield and within the ranks of the German Army. These new dogs served as sentries, messengers, and ammunition carriers. They proved themselves especially capable in aiding wounded soldiers on the battlefield. They even led injured and blinded soldiers off the battlefield to safety and medical attention. This latter act by the new breed eventually led to the development of the first seeing eye dog, an important function the GSD still serves today.

While at first amused by the use of dogs on the battlefield, the soldiers on both sides of the conflict were quickly impressed. They saw these new dogs performing numerous heroic acts under stressful and dangerous conditions. In fact, soldiers were so impressed by the dogs’ capabilities that after the conflict, the Germans, as well as the Americans and the English, began to develop their own cadre of German Shepherd Dogs for use in the military. GSDs would prove themselves again in conflict when World War II broke out in 1939.

During WWII, the Germans again utilized GSDs, and the U.S. began deploying them, as well. U.S. GSDs served mainly as messengers, helping soldiers to communicate on the battlefield. GSDs also acted as guards and search and rescue dogs during the war. In all of these roles, the GSDs performed well. This led to the establishment of many K-9 training camps, where GSDs began training regularly for service in the U.S. Military.

By 1944, however, the military reduced that list to seven: German Shepherds, Doberman Pinschers, Belgian Sheep Dogs, Siberian huskies, farm collies, Eskimo dogs, and Malamutes. Today, GSDs are the only breed still trained by the U.S. Military from that original list. Modern additions include the Belgian Malinois and Labrador Retrievers now being trained and mobilized as Military Working Dogs (MWDs).

Training for dogs at these K-9 Camps lasted between 8 and 12 weeks and consisted of “basic training” to get the dogs accustomed to military life. After this initial twelve-week training period, the dogs would go on to a specialized training course in one of four areas: Sentry Dog training; Scout or Patrol Dog training; Messenger Dog training; or Mine Detection Dog training.

After World War II, due to lack of interest and budget issues, the military cancelled and closed most of the War Dog Programs. The 26th Scout Dog Platoon, however, stayed intact to some degree and moved from Front Royal, Virginia to Fort Riley, Kansas in 1948. On December 7th, 1951, the responsibility for dog training was transferred to the Military Police Corps. The 26th Scout Dog Platoon moved again to Fort Carson, Colorado.

The 26th Scout Dog Platoon was the only active War Dog Platoon to serve in the Korean War. It served with honor and distinction in Korea from June 12th, 1951 to June 26th, 1953. Platoon members were awarded a total of three Silver Stars, six Bronze Stars for Valor, and thirty-five Bronze Stars for meritorious service. On February 27th, 1953, the Department of the Army recognized the accomplishments of the platoon in General Order No. 21.

One Dog who proved an outstanding success with the 26th Infantry Scout Dog Platoon in Korea was Scout Dog York (011X). York completed 148 combat patrols, the last one coming the day before the Armistice was signed officially ending the war. On July 1, 1957, the War Dog Training Center was moved from Fort Carson, Colorado to Fort Benning, Georgia¹.
______________
¹Webpage, 47th Scout Dog Platoon, http://www.47ipsd.us/47k9hist.htm

During the initial phases of the Vietnam War, German Shepherds were used mainly on Air Force installations as sentry dogs. However, as the war escalated, The United States Marine Corps entered into a service agreement with the US Army to have them train German Shepherds as scout dogs. This would be the first time since World War II that the Marines had used scout dogs. Two Marine scout dog platoons were deployed to Vietnam in February 1966.

Dogs are comrades, not equipment

Over 9,000 handlers and 4,000 dogs served in the Vietnam War. The final disposition of the dogs after the war is a sad and disgraceful episode in our military’s history, however. At the time, the dogs were viewed as equipment by the military, and disposition of the dogs after the war was done in the most economical way. The dogs were given to the reluctant South Vietnamese military if possible for an unknown disposition, and at worst, were euthanized or simply left to fend for themselves. A most despicable and shameful ending for the beautiful and heroic dogs who had served our military personnel so gallantly on the battlefield.

This sad episode led to a large public outcry. In response, the military pledged not to dispose of military working dogs in the same manner. Congress eventually passed a law that allows military dogs to have an honorable retirement. President Clinton signed a bill in November 2000 (H.R. 5314), which amended title 10 of the US Code. This allowed for the adoption of retired military working dogs to former handlers and other qualified civilians.

Now, these life-saving dogs in the military can finally look forward to a comfortable and dignified retirement.

According to a former Vietnam MWD Handler here at MWDTSA, GSDs served in Vietnam not only as Scout Dogs but also as Mine & Tunnel dogs. The advent of IHS fever helped the US military decide not to bring home GSDs, since they and most US bred dogs were subject to it. After Vietnam, all dog units except AF were disbanded. Due to the “overbreeding” of American GSDs, the AF began its favoritism toward the Malinois, including a breeding program.

German Shepherd Dogs: 9/11 and Beyond

German Shepherd Dogs have been part of the US Military’s Military Working Dog program since the end of the Vietnam war, through the Cold War years and up to today’s climate of global terrorism and asymmetric threats. According to a recent article in the New York Times, “German Shepherds and Belgian Malinois are the most common breeds of dogs used by military operators, because they have the best overall combination of keen sense of smell, endurance, speed, strength, courage, intelligence, and adaptability to almost any climatic condition.”

Currently, the Army has approximately 600 dog teams, which have seen service in Iraq and Afghanistan³. The courage and loyalty of these dogs have continued to save lives and prevent injuries since creation of the K-9 Corps.

Many of the dogs on these current teams are German Shepherds, and they serve in many roles and perform many duties. Today, we can see German Shepherds performing HALO jumps with Special Operators and inserting from boats with Navy SEAL Teams. These dogs continue to be valued members of our Military and patriotic guardians of our freedom.

German Shepherd Dogs likely will have a place in our military for years to come. They have served with distinction in many theaters and in many conflicts around the world. Should you have the good fortune to meet MWD teams, please thank them for serving our country.
___________________
³U.S. Army.mil

The Military Working Dog Team Support Association is an all-volunteer 501(c)(3) nonprofit serving MWD teams in the Army, Navy, Air Force, Marines, and Coast Guard. With your support, we send quarterly care packages to MWD teams deployed in global combat zones. Additionally, we boost morale with stateside MWD kennel visits. We promote veteran causes and memorials, including recognition of retired MWDs. And we host education events and create content to educate the public about the jobs of MWD teams. To learn more, visit MWDTSA’s home page.