Will Chesney, an “ordinary” high school student living in a Southeast Texas trailer park, had a big dream—to become a Navy SEAL. In a gripping autobiography, No Ordinary Dog, he chronicles his journey from enlistment through SEAL training and multiple deployments. Along the way, Chesney became a dog handler, with MWD Cairo as his four-legged partner. Yes, he was “dad” to the dog who served during the 2011 Osama Bin Laden raid.

The title and introduction suggest a story about a single military working dog, but this book covers wider territory. Told chronologically, the chapters contain a story within a story. The first thread relates to the Navy SEAL mindset.

Every SEAL—two-legged and four-legged—must have rock-solid self-control. “The SEALS want men who cannot only handle adversity but who will not let their emotions get in the way of completing a job,” explains Chesney.

For humans, this means compartmentalizing the bad stuff and setting it aside in order to maintain laser focus on the mission at hand. For military working dogs, this requires single-mindedly and fearlessly doing their job, amidst loud noise, chaos, and tempting distractions. Over time, the trauma of war can breach even the tightest compartmentalization.

The second thread, of course, explores the human-canine bond, particularly between Chesney and Cairo.

The book concludes with the two threads intertwined.

Chesney does not become a dog handler until Chapter 8, one-third of the way through the book. Readers watch the bond grow between Chesney and Cairo from the first meeting to complete trust—from early training to dangerous deployments.

The book describes the military’s procurement and training processes for military working dogs. It also covers the handlers’ learning curve, including the occupational hazards and challenges they face. The bruises and bites. The 24/7 demands of feeding, grooming, exercising, and training a dog, while also maintaining personal combat readiness. The logistics of deploying with a K9. And the complexity of skills such as fast-roping from a helicopter with a dog.

The narrative chronicles several missions, not just the Bin Laden raid, and details the harsh realities of war for both two- and four-legged service members. The sounds. The visuals. The loss. 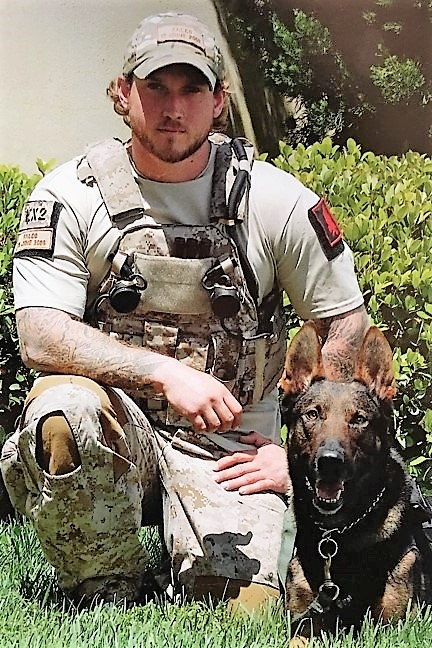 The catch-22 of a SEAL mindset

Resilience, perseverance, and focus carried Chesney through grueling months of SEAL training and eventual deployments. It kept him clear-minded during the Bin Laden raid and countless other missions.

As the book progresses, however, the very trait that seems most prized in a SEAL becomes problematic. How long can a person mentally set aside trauma and loss, before the images and feelings invade nighttime sleep and daytime functioning? How many explosions can concuss the brain before damage occurs?

“A decorated SEAL is not supposed to suffer from depression, because mental health issues are a sign of weakness, right? But that’s just bullshit.”

Will Chesney offers straight talk on PTSD and TBI

“I understood the power of post-traumatic stress, the havoc it can wreak on your body as well as your mind, and the danger of pushing it all down inside to someplace where you think it can’t touch you. Except eventually it all boils up to the surface again,” says Chesney.

He describes his experience with PTSD in detail, including debilitating migraines. Doctors and specialists attempted to pinpoint the cause and find relief for the symptoms, to no avail initially. Play sessions with Cairo seemed to be the best medicine, providing temporary respites from the chronic pain and related depression.

Ultimately, Chesney adopted Cairo and provided his end-of-life care. The book ends in a bittersweet place, yet offers a sense of hope. No Ordinary Dog demonstrates the healing and redemptive nature of the human-canine bond.

Every public library needs this book, as well as high school and college libraries.

Family members and friends of veterans and active-duty military will benefit from reading it. Service members, past and present, will find things to relate to in Chesney’s story.

Anyone who studies history—particularly, regarding 9/11—will get a clearer portrait of what modern-day military deployment looks like. Most civilians today have no idea what the War on Terror has involved.

Mental health providers, doctors, and veterinarians will gain a more comprehensive picture of training, deployments, battlefield injuries and their aftermath, and the traumatic events and losses that two- and four-legged service members experience.

Will Chesney and co-writer Joe Layden have done a public service by sharing this story. It’s a fast-paced opportunity to understand more about today’s military and the role of K9s in keeping our service members safe. It’s a heart-felt tribute to the human-canine bond. But most importantly, it encourages people with PTSD and TBI to reach out for support.

“A lot of vets struggle with symptoms related to their service, and often they feel like they have to suffer in silence. Alone. I felt that way a lot of the time. But there is help, and I was fortunate to find it. I’d like to help others find it, as well.”

You can purchase the book here.

To learn how you can support currently-deployed military working dog teams, visit https://www.mwdtsa.org/.