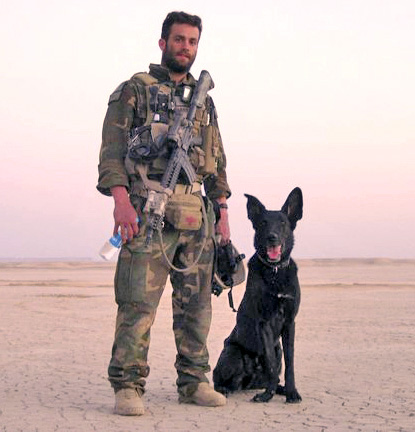 The official Department of Defense news release uses phrases such as “moving exposed down the line,” “rushed into the kill zone,” “pinned down,” “flurries of insurgent machine gun and mortar fire” and noted that in the end, “they had destroyed the bomb factory, and had killed approximately 50 enemy fighters.”

Soutra’s version talks more about his partner, Posha. The Marine states clearly that half of the Navy Cross belongs to his best friend, a solid black male German shepherd dog with wonky ears, an affable personality and a brilliance and steadfastness that are hallmarks of this splendid breed. “Posha made me the Marine I am today.”

Billy could not give enough accolades to his dog. “During all of the gunfire, as we moved into the firefight, he didn’t hesitate, he didn’t cower, he did everything exactly when and how I did it for two straight days. If he had faltered or balked at any point, it could have been different.” He added, “He always reacted the same way. He saved my life.”

On a previous deployment to Iraq in 2009, Soutra and Posha’s teamwork was so precise and seamless that, in a rare event, the Marines meritoriously promoted Soutra to Sergeant and by extension, Posha to SSgt.

While Posha made it through the second combat deployment, he later succumbed to cancer and was euthanized in 2011. His loss was particularly difficult for his handler. “It’s been a year now, but it still hurts when I think about how he got cancer and had to be put down.”

Posha’s ashes rest in an urn in a place of honor at Soutra’s bedside. If Soutra has his way, his German shepherd hero who is now buried in his heart will one day be buried with him. “That way, we will always be together.”

“I wish I could tell you that it’s going to be okay, but the truth is you’ve always been the one to pave the way.

And although you’ve done enough already, I ask that you still watch over me, making sure the roads I travel without you are safe.”

Sergeant William “Billy” Soutra was awarded the Navy Cross at Camp Pendleton, CA on December 3, 2012. Click play, below, to listen to the audio portion of his DOD interview. The full (public domain) video interview can be viewed at http://www.dvidshub.net/video/192339/interviews-with-secretary-navy-and-silver-star-recipient#.Uc3abZxZ7Kc .