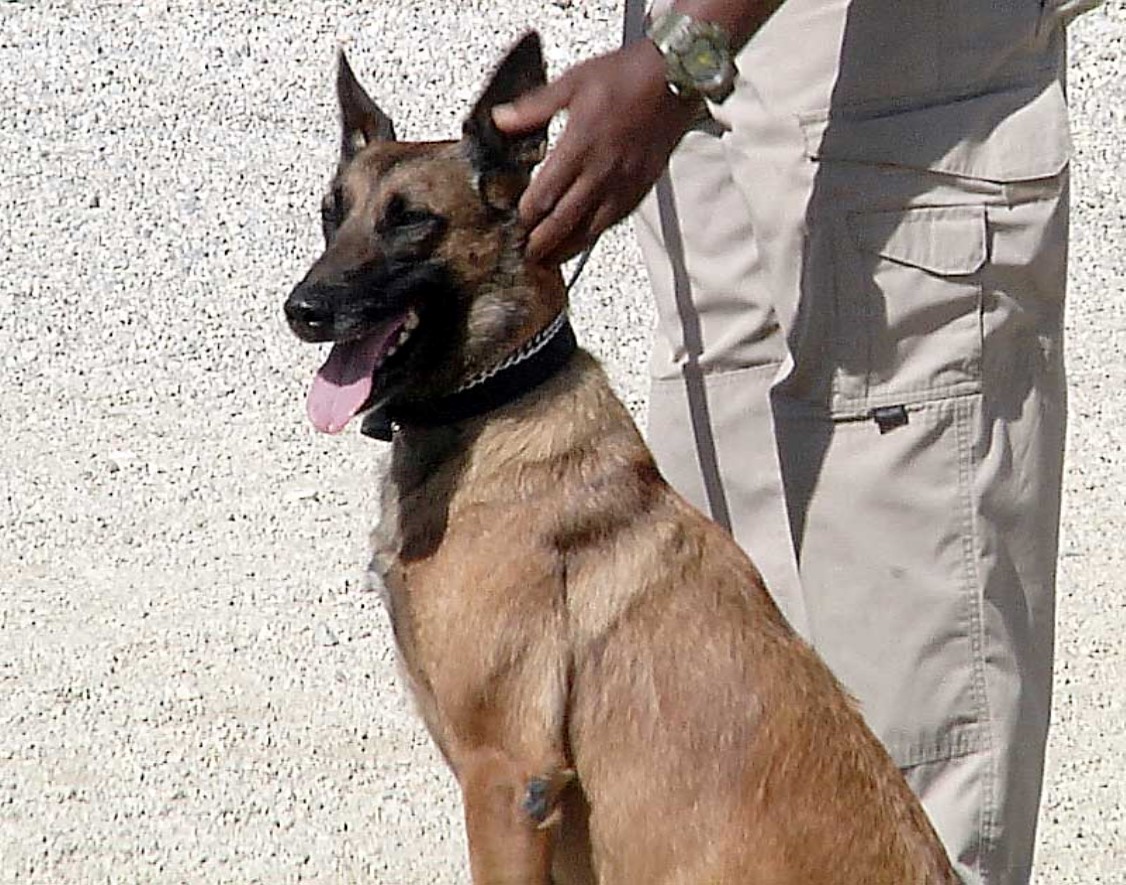 This K9 awaits the next command at a competition to test dogs’ noses and obedience. The event took place in September at Bagram Airfield, Afghanistan. (Video image by Jon Micheal Connor, Army Public Affairs)

But aside from an ultra-sensitive nose, the dogs must have traits of absolute obedience, discipline and loyalty. And more smarts than can be imagined, along with the power to take down an adversary if necessary.

These are only some of the qualities the dogs here must possess in order for them to assist in the U.S. Forces-Afghanistan and the NATO-led Resolute Support mission.

“All the dogs have to be certified,” says Sergeant First Class Christopher Ogle, theater military working dog program manager, U.S. Forces-Afghanistan, Combined Joint Task Force 36. “I certify the contract dogs in theater to make sure they’re able to do their job.”

The breeds of the dogs at the kennel complex are German Shepherds and Belgian Malinois. While Shepherds are more muscular, the Malinois does not lack for strength. Both are ideally suited for security purposes.

The dog teams—consisting of handler and dog—provide direct counter to Improvised Explosive Devices, the enemy’s weapon of choice.

Detection improves mission effectiveness and reduces IED-related casualties. A dog’s nose is the key to sniffing out bombs inside and outside the wire, Ogle said.

“There’s no machine built yet that can duplicate what a dog can do.”

“There’s no substitute for the detection of a dog,” says William Cronin, director for American K9 for Afghanistan and Mali, West Africa.

Cronin has been in his position for five years working out of Kabul, Afghanistan’s capital. He was at Bagram Airfield to see some of his dogs carry out their skills in a two-day K9 competition in mid-September.

The company’s headquarters is in Moyock, North Carolina, and part of a bigger organization, Constellis. That company is a leading provider in risk management and operational support services to government and commercial customers, according to its website.

“We keep people safe,” Cronin said of AMK9. “We make the world a safer place. There’s a lot of passion in the guys that do this type of work.”

AMK9 has more than 25 years of experience in training and staffing highly qualified detection dogs and handlers with the ultimate goal of quickly implementing and sustaining K9 operations in high-threat, complex locations worldwide, the website stated. And, AMK9 has been working with U.S. forces in Afghanistan and Iraq since 2004.

The dogs are of the highest quality with proven working dog bloodlines from European sources. In fact, less than 10 percent of the dogs screened will pass the initial evaluation and be approved for training at AMK9 facilities, according to the organization’s website.

“This actually sharpens their skills because these teams have been preparing for a month and a half to get ready for this competition,” Ogle said.

The first day tested the teams on explosives detection. The dogs had to find two explosives placed on a possible 10 vehicles with distractors such as foods like bacon and sausage. In this timed event, most dogs averaged about two minutes to find explosives, Ogle said.

“The dog can locate it (explosives) outside the vehicle and tell you there’s something wrong. Some of the dogs can hit it up from 50 feet away,” Ogle said. “Therefore, you’re not putting people in harm’s way. The dog can go up and search the object, take the Soldier out of the aspect, reducing the risk of the handler getting hurt.”

The second day tested obedience. Situations were created to see how obedient the dog was to his handler regardless of what was going on, i.e., a man in a padded suit trying to get the dog’s attention resulting in an attack.

In the end, handler Frank Musoli and his partner, Tina, took the most honors with the top Overall Dog Team and also received a second place in the Detection category and third in the Obedience/Controlled Aggression Category.

Asked what he thought of having a non-computer job while helping to save lives, Musoli said he recognizes how vital such a job is to the mission in Afghanistan.

“It doesn’t mean I’m only here for money. I’m here to support the U.S. Army … we are in it for peace. We make sure our people in the FOB (Forward Operating Base), stay alive,” Musoli said.

“I make sure when I’m out there at the checkpoint, I make sure I focus on what took me there. I make sure people’s lives—the generals, colonels, other guys and civilians—are safe,” he said.

So, between man and dog, IEDs do have an enemy.

“The dogs are the best resource out there that units can employ to make their units safer,” Ogle said. “The dogs detect stuff … explosives.”

This article and a slide show originally appeared here. Many thanks to author Jon Micheal Connor, Army Public Affairs, for inviting MWDTSA to repost.

MWDTSA sends quarterly care packages to military working dog teams (dog plus handler) deployed in global combat zones. We are currently collecting items for our Q4-2018 boxes, which will ship on December 1. You can contribute by visiting MWDTSA’s Amazon Wish List. It’s a quick, easy way to say thank you to these intrepid teams.